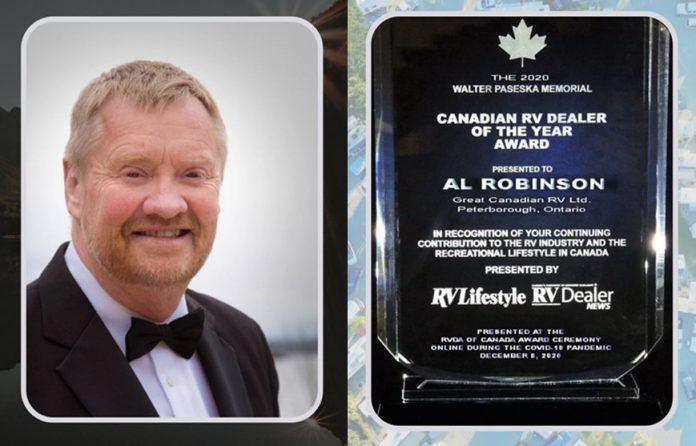 The presentation of the Award was a virtual one (click here to view the presentation), replacing an official ceremony that is usually held to coincide with the RVDA’s annual general meeting. It is given to the Canadian RV dealer who best exemplifies the professionalism and community spirit of RV dealers throughout the country.

The other nominees were: Mike Porter of Bluenose RV Centre in Bridgewater, Nova Scotia and Bob Verwey of Owasco RV Centre in Bowmanville, Ontario. Each year nominees are submitted to the RVDA selection committee, which consists of previous Canadian RV Dealer of the Year winners and representatives from the RVDA of Canada and founding sponsor RV Lifestyle Magazine.

Upon winning the Award Al Robinson said: “I am really honoured, I truly appreciate it. Congratulations to the nominees, really anyone of us could have won this Award. We have such an incredible industry, so many relationships are built within it, between our suppliers and other dealerships. We are just so blessed to have great customers as well to build relationships with too. Dealer of the Year is not just one person, it’s our dealership. We couldn’t do it without the staff that we have… and I couldn’t have done it without Stacey. Once again, I thank you for this honour.”

Al Robinson has worked in the RV industry for 48 years – 35 of which have been as a dealer principal – and in 2012 opened Great Canadian RV Ltd, whose motto is “The Better Way to Get Away!”

In October 2020 he won the Ontario RV Dealer’s Association (ORVDA) Dealer of the Year Award (read the article here). He works side by side with his wife Stacey and employs a staff of 10; one of whom, Richard Fitzgerald, has been with Al for over three decades. The dealership boasts a four-bay service shop, the largest RV parts and accessories store in their region and proudly presents Coachmen Catalina and Freedom Express, East to West Della Terra and Alta, Forest River Impression fifth wheels and Real Lite Truck Campers. Al strongly believes in education; he sends his staff to every learning opportunity available, making Great Canadian RV both a progressive workplace and place of business. The company is based on the core values of quality product, exceptional customer service, straightforward business practice, and community involvement.

Mike Gaeddert, GM, Coachmen Catalina, who has had a working relationship with Al for over seven years, said: “I have known both Al and the dealership to hold themselves to a very high standard on customer and community service. [They] have continually worked with us to deliver the best possible customer experience from both sales and service.”

Lisa Liegl Rees, of East to West RV, added: “Al Robinson has personally worked with my father, Pete, for over 35 years and I have worked with Al and his dealership since our inception of East to West in 2018. It has been a privilege to work with Al and Stacey as they exude true passion for the RV lifestyle – they are dedicated to serving the RV industry and its people. Great Canadian RV continues to surpass the expectations of being a Forest River dealer and this dealership is always fair, courteous and above all, professional in every respect. East to West and Forest River’s partnership with Great Canadian RV is exemplary of the model to which we would like all dealers to aspire.”

Al has been a lifetime member of ORVDA and is currently chairman of the government relations committee where he has made invaluable connections and contributions on behalf of the RV industry. He has also served on the ORVDA board, the Ontario Private Campground Association board, and has been involved in a multitude of local and regional groups such as: the Kawartha Lake Associated District Chamber of Commerce, Kawartha Lakes Doctor Recruitment Board, Omemee Medical Center Board, the Trent-Severn Waterway Steering Committee and the OPP Veteran’s Association.

Al grew up camping with his family until his parents Marg and Ken opened Beaver Park in Omemee, Ontario in 1972. It was here that he discovered the outdoors and learned about running a business, selling RVs and servicing customers from a very young age, seeing first-hand the enjoyment and magic families experienced while camping. Al, alongside Roger Faulkner (now President of General Coach Canada), was instrumental in the design of the first Northlander Park Model trailers back in the early 1980s.

In 1977 Al fulfilled his goal of becoming a police officer and served on the Metro Toronto Police Force until 1983, when he made the decision to return to the growing family business at Beaver Park to work alongside his parents. During this time Al completed an Honours degree at York University.

Having developed a particular passion for the RV industry, Al opened his own dealership in 1986 and named it Open Road Trailer Sales. Based in Lindsay, Ontario, Open Road quickly became the number-one selling Cobra (now Forest River) dealer in Canada. It was here where Al began to form relationships with manufacturers, campers and park owners. Open Road was consolidated in 1992 when Al purchased a rundown campground and developed it into Bailey’s Bay Resort. In 2000, Al purchased Beaver Park from his parents and successfully grew the businesses until it was purchased by Parkbridge Resorts. It remains a popular RV resort to this day.

Al and Great Canadian RV have shown tremendous community involvement over the years, from hauling trailers for hurricane relief to sponsoring youth teams and supporting causes such as the Kinsmen Club Toy Drive, the Food Bank, the Canadian Guide Dogs for the Blind, The Boys and Girls Club, and the Make-A-Wish Foundation, to which the dealership donated a complete 2019 Coachmen Catalina trailer package with extended warranty for a young girl and her family. In the spring and summer of 2020, Al and Stacey assisted nearly 50 frontline workers across Ontario and into New York to safely self-isolate in RVs during the COVID-19 crisis. Of his generous spirit, he simply stated, “We do what we can to help others.” Pete Liegl, Founder and CEO, Forest River, Inc., added: “The Robinson’s dealership takes pride in serving not only their customers but also their community.”

Al has a true passion for the RV lifestyle. He loves to camp and travel whenever time permits, as well as kayak, Sea-Doo and spend time with his family. Outside of his Great Canadian RV family, Al and Stacey have a combined total of five children and one grandchild.

Most of all, Al Robinson truly cares for his clients. Said returning customer Mike Norman: “Al is someone who always listens – really listens, to your concerns or issues; and he makes sure every detail of what you need is looked at. It’s great to deal with someone who cares so deeply about the folks he does business with. There have been a few times we have been out camping and had questions about our trailer or how to deal with something in the trailer, and Al is always quick to call back with his expertise.”

The Canadian RV Dealer of the Year Award was established in 1989 in memory of the late Walter Paseska of Walt’s Trailer Sales in Headingly, Manitoba. Walt dedicated many years to the Canadian RV industry and was instrumental in bringing the RVDA to his province. The Award was conceived and sponsored by Camping Canada – RV Lifestyle Magazine, Vie en Plein Air, and RV Dealer News.

Each year, in conjunction with RV Lifestyle Magazine/RV Dealer News, the RVDA of Canada acknowledges the excellent work of RV dealers who have been leaders in the RVDA movement either regionally or at a provincial or national level; who have exhibited a long-term dedication to the RV community; and who have made substantial contributions to their communities. 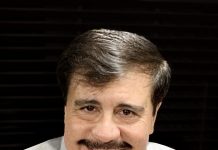 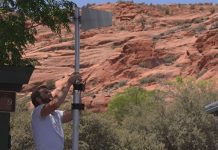 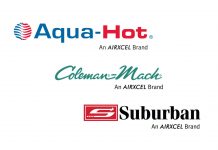