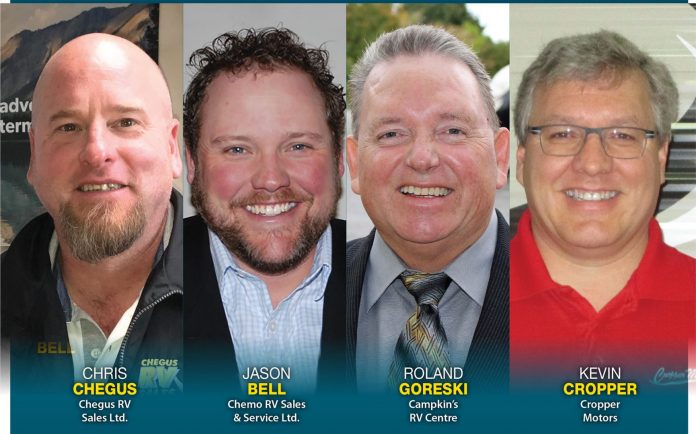 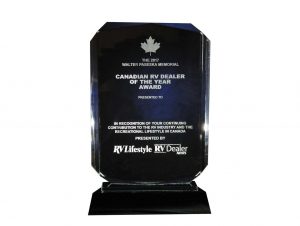 This award, created in 1989 in memory of the late Walt Paseska, and sponsored by RV Lifestyle Magazine, Vie en Plein Air, and RV Lifestyle Dealer News, is presented to the Canadian RV dealer who, in the eyes of his or her peers, best exemplifies the professionalism and community spirit of RV dealers throughout the country.

This year’s nominees for Canadian RV Dealer of the Year include Jason Bell, Chris Chegus, Kevin Cropper and Roland Goreski. (Listed in no particular order)

A 12-year employee at Chemo RV including 10 years as dealer principal, Jason Bell is well known throughout western Canada for his work with the RVDA of BC, the RVDA of Canada board, VSA committees and as a long-term member of the Spader 20 Group performance group. His efforts on behalf of the industry include terms on the provincial RVDA board, as RVDA of BC president, RVDA of BC golf committee chair, RVDA of Canada director and a member of the national education bursary selection committee. He is also an active participant with both RV Care and the Route 66 RV Network.

Jason Bell has grown the family business with a new store at the 150 Mile House location, and has begun construction of a second location at Quesnel. He was recognized with an RV Business Top 50 Dealer Award in 2014.

Bell is also known for supporting first responders, including delivering food and water to road block teams responding to this summer’s wild fires in caribou Regional District and supplying no less than 24 RVs to be used as housing for firefighters battling local fires. The convoy of trailers, which became known in national media as “Rink City,” provided a safe pace for firefighters and volunteers to sleep after working 18-hour days battling the intense fires.

Established in 1994, Chegus RV Sales Ltd. is a family business that has grown to become one of the largest RV dealerships in Saskatchewan. Larry and Jean Chegus, with Larry’s brother Brian, initially specialized in used RVs, sourcing them from across the country. But the business changed substantially in 2001 when their son Chris and his wife Melissa returned to the family business from Toronto, and began applying their experience in the auto industry.

Recognizing that the RV industry was changing rapidly, Chris Chegus changed the family business to also sell new RVs, becoming a Keystone dealer that same year. The business grew steadily, and in 2005 it purchased a property directly across the highway from its existing location. The new site, with an existing building and four acres of land, provided much-needed space for further growth, including the establishment of service bays. A facility expansion two years later doubled its service bay capacity, while a further expansion in 2010 added a detailing bay and an additional 2,500 square foot building housing the dealership’s growing parts department.

Chris Chegus has become as well known for his community activities and staff initiatives as he has for his contributions to the dealership’s growth. Regular staff barbecues during the summer months, the provision of a trailer at nearby Fishing Lake for staff to use with their families, and near-constant support of local charities have established Chris and the dealership as a pillar in the community. Chegus RV Sales supports a wide range of local clubs, sports teams, parades and community events, including support of the Low Way Home for Canadian veterans, the Humboldt and District Hospital Foundation, a strongman competition, and the local Walk A Mile In Her Shoes event to assist victims of sexual assault – in which Chris Chegus was recognized as the top fundraiser.

With 36 years of active service in the RV industry, including 23 years as dealer principal at Cropper Motors, Kevin Cropper has become a fixture in the Saskatchewan RV landscape. He has tirelessly donated his time and expertise serving on the provincial RVDA board, including a number of committee roles and a term as president of the RVDA of Saskatchewan.

The family business was founded in 1963 when Kevin’s father, Allen, purchased a small agricultural equipment dealership which branched out by selling cars and, later, RVs. Kevin Cropper has been involved with the business for more than 36 years, helping to grow it to its current level with a 10,000 square foot showroom, 50 full-time employees and annual sales in excess of $28 million dollars.

Built on a foundation of offering exemplary customer service, Cropper Motors under Kevin’s lead has maintained a 100 percent customer satisfaction level within Fleetwood’s Circle of Excellence.

An RV industry “lifer” Roland Goreski has been an active figure in the Ontario RV community for over 40 years, the last four as the owner and general manager at Campkin’s RV Centre. Over those four decades he has donated his time and energy to serve on a number of provincial and national boards and committees, including the ORVDA board and the ORVDA government relations committee. He has served as the ORVDA Education Committee chair, and has donated further time nationally with the RVDA of Canada education committee.

Roland Goreski began working in the RV industry in the 1970s at his family’s dealership, Skyview Trailers, located in Trenton, Ontario. His father, Mel Goreski, was at that time an ORVDA board member and a strong advocate of the association’s programs and RV shows. Roland Goreski quickly embraced the general manager position at Skyview Trailers, joining a Spader 20 Group and expanding his relationship with colleagues from across Canada. To this day he credits his professional approach to his father, who once told him “amateurs make excuses, professionals get it done.”

Goreski ultimately left the family business and took a position in the service department at Campkin’s RV Centre. He then became general manager, and spearheaded an expansion in 2009, growing the company during one of the most serious economic downturns in history.

When company owner Brad Campkin decided it was time to retire, Goreski was the perfect candidate to purchase the dealership and take it forward. “Roland has all the experience and desire that it takes to run a successful RV dealership in the 21st century, I quickly realized he was the perfect guy to carry on the Campkin’s RV business,” said Campkin.

Like his father and his former boss, Goreski has always made sure to support local charities and community events, including Make-a-Wish, Big Brothers Big Sisters of North Durham and Oshawa/Whitby, as well as community events such as the Brooklin Fair, Port Perry Fair, Durham Highland Games and Whitby Ribfest. 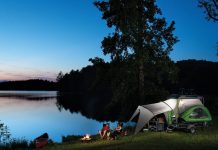 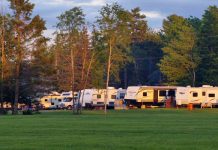 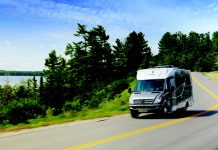