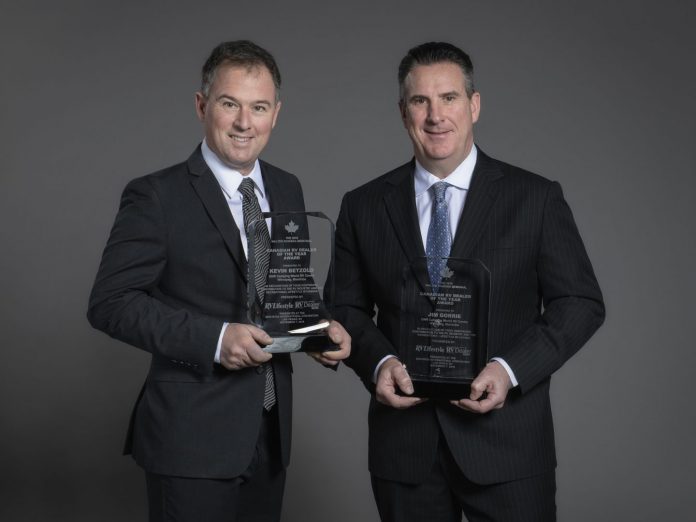 This award, created in 1989 in memory of the late Walt Paseska, and sponsored by RV Lifestyle Magazine, Vie en Plein Air, and RV Lifestyle Dealer News, is presented to the Canadian RV dealer who, in the eyes of his or her peers, best exemplifies the professionalism and community spirit of RV dealers throughout the country. 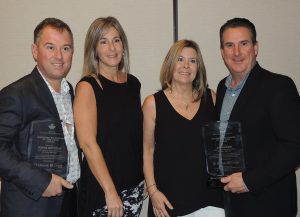 Jim Gorrie and Kevin Betzold are the co-recipients of the Walter Paseska Memorial Canadian RV Dealer of the Year for 2018.

Jim Gorrie and Kevin Betzold are more than just the co-owners and dealer principals of GNR Camping World RV Centre in Winnipeg – they’re brothers-in-law, who literally grew up in the RV industry. And now, they’re the first-ever co-recipients of the Walt Paseska Memorial – Canadian RV Dealer Of The Year award.

Gorrie and Betzold’s commitment to success comes naturally as their father-in-law, Gil Robert, was one of the original three partners who launched the dealership back in 1971. Then called GNR Sportsland Centre Ltd., the business took its name from the first names of the three partners – Gil Robert, Noel Painchaud and Rheal Robert. Originally operated as a small RV service depot in Winnipeg’s St. Boniface ward, GNR Sportsland Centre quickly developed a substantial customer base as the first-generation RV boom took hold across North America. Their attention to detail and focus on maintaining a high level of customer service allowed the business to quickly develop a substantial and expanding customer base and before long the partners found themselves looking for a larger facility as they quickly ran out of space at their original address. GNR Sportsland Centre wound up moving to a larger location in 1973, when it took possession of a 4,000 square-foot building on Dugald Road where it continues to operate today.

The new location was exactly what the business needed to continue its rapid growth. A minor name change – to GNR Camping World – followed the move, and better reflected GNR’s expanding product selection and status as a destination for all camping needs.

Although the RV industry has experienced its ups and downs over the years, GNR Camping World has managed to sustain consistent, steady growth throughout. The selection of a business location on 11 acres of land proved to be critical, as the business has been forced to renovate and expand no less than five times since. What started out as a 4,000 square-foot operation has developed over time to become today’s 21,500 square-foot enterprise with more than 40 employees.

Jim Gorrie entered the business in 1990, followed by Betzold five years later. In 2001 they bought their first shares in the company and today are the sole partners in GNR Camping World RV Centre. In 2009, the company grew further still when it acquired Recreation World RV’s in Thunder Bay, Ontario.

As strong believers in the benefits of industry collaboration, both Gorrie and Betzold have long been active supporters of the RV industry at both the provincial and federal levels. Both have served on the board of directors at the RVDA of Manitoba, including terms as vice-president and president. Gorrie currently serves on the RVDA of Canada board of directors and is the current chair of Go RVing Canada following Betzold’s seven-year stint on the RVDA of Canada board including a term as president from 2007-2008. Both continue to contribute their expertise and time in the service of industry committees, including the Manitoba RV Show committee, and are deeply involved with industry and government issues such as negotiating rates with Manitoba Public Insurance and negotiating with the Department of Labour on safety regulations.

GNR Camping World RV Centre is also an active participant in the local community, sponsoring a wide range of programs and initiatives with a focus on programs devoted to children. The dealership remains an active supporter of both the Children’s Wish and the Dream Factory in helping sick kids and their families, as well as the Boys and Girls Clubs of Winnipeg. The company even operates a fleet of three Community Events trailers used to support a wide variety of local events in and around Winnipeg each year, including the Manitoba Marathon and Festival du Voyageur.

“RVing is a lifestyle and a true family experience,” says Gorrie. “We are a family business, and our family focus is always front and centre at the dealership.”

On a personal level, Gorrie and Betzold are both longtime supporters of the St. Amant Centre, a comprehensive resource for Manitobans with developmental disabilities and autism.

With its focus on community, industry support and delivering a superior level of customer service, GNR Camping World RV Centre has found itself frequently recognized and honoured with a diverse range of awards over the years. This includes having been awarded numerous Consumer Choice Awards, a PME Award (a national award presented to small and medium sized enterprises) for 2007, and the St. Boniface Chamber of Commerce Dealer of the Year Award for 2008.

And now, the company can add the 28th Annual Walt Paseska Memorial – Canadian RV Dealer Of The Year award to its dealership display case.

In presenting the award at the RVDA annual general meeting in Las Vegas, RV Lifestyle Magazine and RV Dealer News Associate Publisher Melanie Taylor explained it was not the first time the award was given to the second generation of RV dealer.

“2018 marks the second time in the history of the Canadian RV Dealer of the Year Award that we have made the presentation to a second-generation winner. In 2004, Jack Bell from Chemo RV in B.C. was our Canadian RV Dealer of the Year, and last year, his son Jason Bell was the first of our second-generation winners,” explains Taylor.

“Jim and Kevin have made significant long-term contributions to their provincial RVDA, to the RVDA of Canada, and to their local community. As co-owners of the dealership, they bring decades of experience to the business, years of tireless support to the RVDA movement in Canada, and an enviable track record of charitable service to the community,” says Taylor.

Being the first time that the award has been awarded jointly, Gorrie and Betzold were both moved and surprised to become the first co-recipients.

“Thank you very much for this great honour”, said Betzold. “Our father-in-law, Gil Robert, started the dealership in the early 1970s. His motto was always to create a unique and memorable camping experience. We strive to carry on that motto and ensure that we provide complete customer satisfaction and are totally committed to enhancing RV lifestyles.”